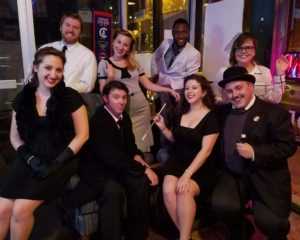 Local musical improvisation group Rhyme & Punishmint has given NRS a generous donation of proceeds from their ticket sales from their newest show, “3 Blocks from Broadway,’ at the Annoyance Theater. Their donation will go to support our work with runaway and homeless youth. We are truly grateful to this group of talented performers for choosing NRS to receive this generous gift.

We spoke with a member of the group, and former NRS’ crisis services volunteer aka “liner” at NRS, Stephanie L. Seweryn, about R & P, her work as a liner and why she chooses to support NRS.

Stephanie was a volunteer at NRS for 3 years and even lived above our old location on 3080 N. Lincoln. “I saw what (NRS) was doing, and wanted to get involved,” Stephanie said. “The extensive training served me well as a volunteer, and as a person. The open-ended question approach has helped me a lot.”

Stephanie found her experience to be quite special. “The supervisors are phenomenal. I am grateful for their help. They always asked about my shows and my boyfriend.”

Stephanie has since gone on to study improv at MCL and Improv Olympic (iO), and has studied for over 3 years. “Musical comedy is my favorite.” Stephanie began by singing in local choirs and then joined the musical improvisation program, called MINt, at MCL. “I was a part of MINt, where we performed every week.” This is where Rhyme & Punishmint was formed. 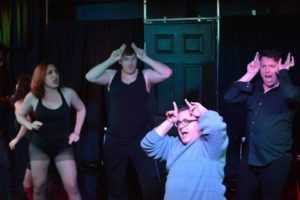 Rhyme & Punishmint specializes in musical improv comedy. Each week, they perform a different Broadway musical based on audience suggestion. “The group just formed last summer,” Stephanie said. “I work with so many talented people who come from across the country.”

Stephanie also connected with MCL because of their interest in social issues. “MCL has a bent towards social justice,” such as their program to provide programming to at-risk youth and teens in Chicago. It was then that Stephanie and the group had the idea to donate proceeds from the ticket sales of one of their performances to a worthy cause.

So what is next for Rhyme & Punishmint? “We will be performing at the Chicago Improv Fest, and some of us will be going to the Phoenix Improv Fest. We are also hoping to remount this show.”

If you are interested in seeing R & P perform, you have ONE MORE CHANCE to see it! 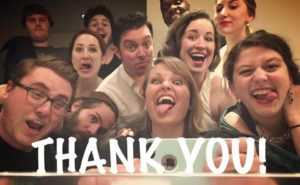