The Facts About Texting While Driving: Safe Driving for Teens

What do you do when you’re driving along and you receive a text?

The Facts About Texting While Driving

What do you do when you’re driving along and you receive a text from your friend asking what you’re doing? If you check it and then respond, you are participating in one of the riskiest behaviors: texting and driving. 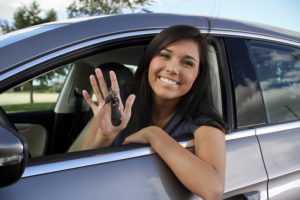 April is Distracted Driving Awareness Month, and teens and young adults have suffered the consequences from not paying attention to their surroundings. NRS wants to help teens to stay safe on the road through safe driving habits.

Here are some facts about texting while driving as a teen.

Motor vehicle accidents are the number one cause of death for U.S. teens according to the CDC.

And while there are many behaviors or activities that can distract someone while s/he are driving. Right now, we’re going to focus on texting and driving.

A 2009 Pew study shows that 1 in 3 texting teens aged 16-17 reported texting while driving or 26% of all American teens. When drivers texts, and drives, their attention is split when it should be focused on driving. Operating a motor vehicle is probably one of the more responsible things that teens do. Taking eyes and focus off the road could seriously injure or kill someone else or yourself.

It is incredibly important to focus on not only driving but also to respond to others on the road, which is not possible while texting. If you’re texting, then you aren’t able to do that. If riding with someone that’s texting and driving, don’t be afraid to ask him/her to stop. That person’s actions affect everyone’s safety.

There are ways to break the texting habit. They include:

But what if an emergency happens?

We ALL rely on our phones in case something happens while on the road so maybe putting it in your trunk isn’t the best idea. But, silence it or find an app that blocks the incoming calls.

Some of these include:

Many of those don’t start working until the car reaches a certain speed. In case of an emergency, the app would turn itself if the car pulls over.

Driving while experiencing sadness, fear, anger or other emotions can cause distraction aren’t safe either. Answering a phone call or text message after reaching a destination is safer for everyone.

NRS wants youth to feel safe and secure in all of their activities, including driving. These tips may help to avoid a potentially dangerous situation.