How Youth Can Protect Themselves from Sexual Assault

In the late 1970s, Take Back the Night Marches started in England by women protesting the violence they faced as they walked down the streets. With the continued work of many advocates since that first event, on April 1, 2001, Sexual Assault Awareness Month was observed in the United States. The National Sexual Violence Resource Center (NSVRC) continues to bring annual awareness to this issue by broadening their scope and prevention campaign to bring sexual assault awareness to the forefront.

The NSVRC defines sexual violence as something that “happens when a person uses force, control or pressure to make someone participate in an unwanted sexual activity.”

Unfortunately, when someone reports that s/he was assaulted or raped by someone s/he knows, the crime isn’t taken seriously because people don’t understand or can’t understand how that type of a relationship can turn violent.

When a youth is assaulted or raped, s/he often don’t seek help. If s/he does, the youth may not be believed. Often times, a youth is questioned and accused of extenuating circumstances (why were you drinking?). Most occur in a place they consider safe, such as; at school or at home. Many that are victimized once, often become victims again in the future.

In 2013, the US Department of Health and Human Services, Administration for Children and Families, Administration on Children, Youth and Families and the Children’s Bureau did a Child Maltreatment Survey. In this survey, they found that from 2009-2013, Child Protective Services substantiated that 63,000 children a year were victims of sexual abuse.

The Rape, Abuse & Incest National Network (RAINN) also has statistics from other studies, such as: for when a victim was under 18, two out of three were aged 12-17 and that females ages 16-19 are 4 times more likely than the general population to be victims of rape, attempted rape or sexual assault. With statistics like that, youth and adults need to work together to ensure that youth are protected and have safe allies to go to. 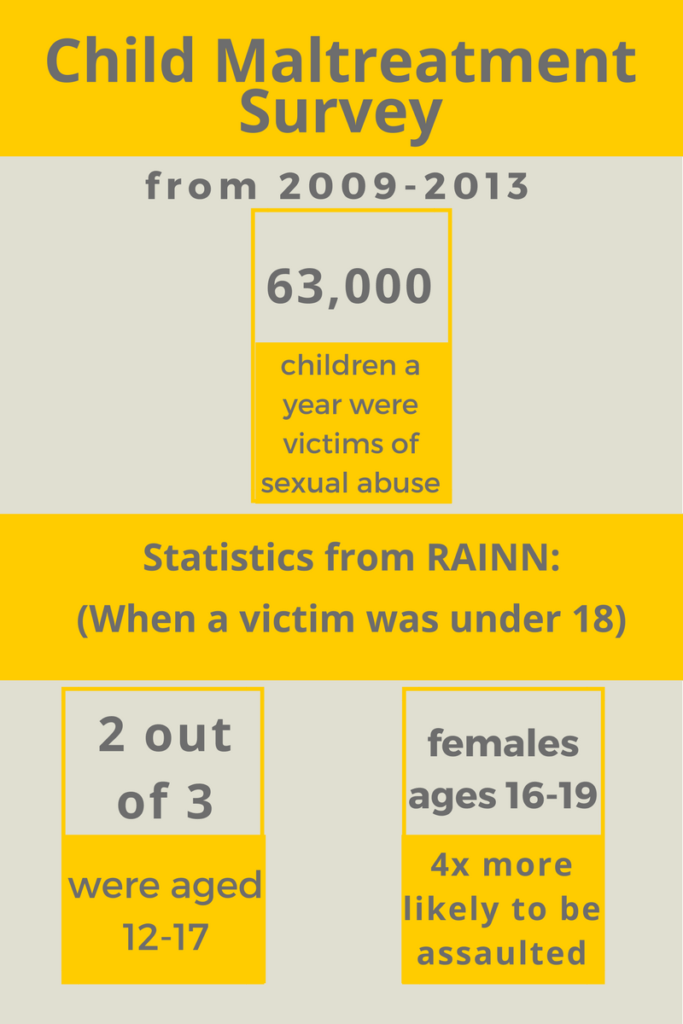 Consent is an agreement between two people to engage in sexual activity which means communicating with your partner. Every. Time. This cannot be emphasized enough.

And giving consent for one thing (kissing) DOES NOT automatically give consent for other activities (touching your genitalia, taking your clothes off or having sex).

Also, having one sexual encounter with a person DOES NOT grant h/er automatic permission in the future and it is OK to say “No” at any time during the encounter. There is no excuse for a person to force anyone to have sexual contact or sex. If it is not consensual, it’s sexual assault or rape. And it is never the victim’s fault.

How To Protect Yourself and Others From Sexual Abuse

If someone is pressuring you by using guilt or intimidation, it can be scary or make you feel unsure of your decision. That person is responsible for his/her choices and actions. If you find yourself in that situation, there might be ways that you can protect yourself and try to safely get away from that person.

For example, if someone is pressuring you and you feel that your safety is threatened, it’s okay to lie in order to exit the situation. Saying that you need to take care of something at home, that you don’t feel good or that you need to go to the bathroom may give you the opportunity to get away and find help.

Most importantly though, if those things don’t work and something does happen to you, IT’S NOT YOUR FAULT.

What if you’re out with friends and you witness something that makes you feel uncomfortable? What are some things you can do to keep yourself and your friend safe? Basically, if you feel that your safety isn’t going to be at risk, you can step in.

How Parents Can Protect Their Children

As a parent, talking to your child about sexual assault may be difficult or uncomfortable. But those hard conversations may give youth the ability to protect or speak up if s/he is ever assaulted.

By starting at a young age and teaching children the correct terminology for body parts makes it more comfortable talking or asking questions about inappropriate contact. By empowering children to say “no” to touches they find uncomfortable and supporting them, they learn to respect themselves.

Many perpetrators use secrets as a way to groom their victims but if a child knows that s/he can talk about these secrets and not get into trouble when talking about them, s/he may be more likely to open up.

Speaking to Teenager(s) About Staying Safe

The conversation can and should continue as children become teens. The talks should go more in depth. Sharing personal experiences may help a teen feel more connected to the issue and may help it to feel more real.

Some youth may not be receptive to talking about personal safety. A youth may feel judged for his/her behavior. If an adult talks to a youth about how to take care of his/her friends, he/she shows a youth that he/she does trust his/her behaviors. The indirect conversation about safe behaviors in relation to friends may be more comfortable.

For some teens, sexual assault is something that “won’t happen to them.” Talking to youth about sexual assault statistics helps build understanding and awareness.

Sexual Assault is Never Your Fault, And How You Get Help

What I really hope you remember is that if you are ever sexually assaulted, it is not your fault. It is not the child’s fault. According to RAINN, sexual assault happens every 98 seconds. You are not alone.

You can get support and assistance 24 hours a day by calling RAINN at 800.656.HOPE or by going to their website for more information. You can also reach out to us here at the National Runaway Safeline at 1-800-RUNAWAY; we’re here to listen, here to help.

By contacting either of those resources, we can help you find local resources, talk about ways to protect yourself and develop a safety plan.