The National Runaway Safeline (NRS) is proud to announce September’s Organization of the Month is Active Minds.

During the month of September, we observe National Suicide Prevention Month.

This is an opportunity to increase awareness amongst communities, families, and individuals about the resources available to those who are considering self-harm.

One of the most helpful resources available is Active Minds, Inc., a national organization based in Washington, D.C. Active Minds empowers students on high school and college campuses to “speak openly about mental health in order to educate others and encourage help-seeking.”

The organization develops student-run advocacy groups that promote education and mental health awareness on campuses across the country. The goal is to remove the stigma around mental health issues and encourage open conversation about mental health.

Students can learn how to get immediate help, how to recognize the signs and symptoms of mental illness, how to help a friend in need, and where to turn when you are feeling lost. 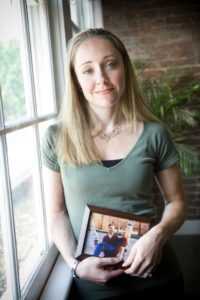 Active Minds was started by Alison Malmon when she was a junior at the University of Pennsylvania after the suicide of her older brother, Brian. Brian had experienced depression and psychosis and was diagnosed as schizoaffective disorder. In 2000, he took his own life.

On campus, Alison noticed that few students talked about mental health issues, and she wanted to change the culture. There were no resources that dealt with the stigma of mental illness, so she created her own. The success of the initial chapter gave rise to others across the country, and a national headquarters was founded in Washington D.C. in 2003 and incorporated as a 501(c)3 organization.

Alison has been named one of the “Top 15 Global Emerging Social Innovators” by Ashoka Changemakers and American Express, Washingtonian of the Year by Washingtonian Magazine, and a Woman of Distinction by the American Association of University Women. She also sits on the National Suicide Prevention Lifeline Consumer/Survivor Subcommittee, Suicide Prevention Resource Center Steering Committee, and Crisis Text Line Advisory Committee.

According to their impact report, more than 12,000 students joined chapters on 528 campuses, and over 5 million students now have access to an Active Minds chapter.

We are proud to consider Active Minds an ally and partner to help keep youth safe, and to name them our September 2017 Organization of the Month.

Organization of the Month for August 2017: National Center for Homeless Education

Organization of the Month for July 2017: Covenant House

Organization of the Month for June 2017: The GLBT National Youth Talkline