After 15 year old Alandra’s mother was deported to Mexico, everything changed. 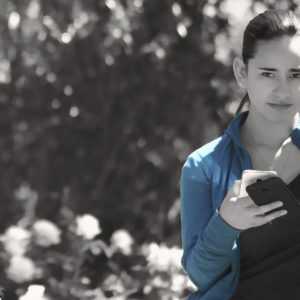 Monique*, a volunteer at NRS, had just begun her shift on a quiet Sunday afternoon when her supervisor looked up from the phone and asked, “Hey Monique, I just got a caller who speaks Spanish.  Are you available?”  “Sure, I can take it!” Monique replied.  The call rang through on her extension.

On the other end of the line, 15-year-old Alandra* was feeling hopeless.  Monique could hear in her voice that she had been crying.  At first, she was reluctant to say what she called about.  There was a moment of silence.  Monique thanked her for calling and let her know that everything she said would be completely confidential. “You don’t have to tell me anything you aren’t comfortable talking about, but you should know anything you say stays between us.”

“I don’t want to run away but I don’t know what else to do,” said Alandra.  Alandra and her two younger siblings moved in with her aunt about five months ago.  She didn’t want to stay there anymore, but she didn’t have anywhere else to go.

“Do you have a good relationship with your tía?” asked Monique.  “No.  She doesn’t want us here.  The house is really crowded with my cousins.  I don’t even have a room, I sleep on a chair in the living room.”

Alandra’s mother was recently deported to Mexico. Alandra couldn’t keep herself from crying when she started talking about it. When her mom was arrested and put into detention, everything in Alandra’s life changed overnight.  She missed her old house, her old school, her friends, and her mom most of all.  Her aunt Maria took her and her siblings in. Maria, as a single mom of four children, barely had the resources to keep them. The house was crowded, and there wasn’t enough food to go around for the seven kids living there.  Maria often said hurtful and mean things to her, or screamed at her. Alandra thought about running away but admitted she had no idea where to go.  She was terrified to ask anyone for help, because she, her siblings, and her aunt and cousins were also undocumented. She also feared being put into the foster care system, where she would be further separated from her family.

“We are so, so sorry to hear that this happened.  You don’t deserve any of this.  We are a safe place to talk to if you ever need it.”  Alandra had been struggling with depression and cut herself to try to cope with her feelings. She had never told anyone about the self-harm, and she was understandably afraid of asking for help because she feared being deported. “It was really brave for you to tell me,” Monique said.  “It is understandable to feel that way.”  Alandra wasn’t suicidal, but she felt hopeless and isolated.

Monique asked if there were any adults she felt safe talking to. Alandra couldn’t think of any at first, but then remembered her ESL teacher, Mrs. Garcia, at her old school.  She had a good relationship with Mrs. Garcia, and still had her contact information.  Monique found some resources for counseling and self-harm for Alandra to use.  They talked about some harm-reduction techniques she could use if she had the urge to cut.  If she started feeling like she might harm herself, she could reach out to a teacher, a friend, or write a letter to her mom.  Instead of cutting, she could also try drawing on herself, or holding ice on her skin.

“Thank you so much for calling.  It sounds like you are such a strong person, and you don’t deserve any of this. We are here to listen and help if you ever need us,” said Monique.  “Thank you so much.  It helps a lot because I didn’t have anyone to talk to,” replied Alandra.

With the help of bilingual volunteers like Monique, or with language interpreter lines, NRS can help youth in any language, 24 hours a day.  NRS is here to listen and provide confidential, non-judgemental support to all youth and families, no matter their situation.