February 2020 Volunteer of the Month: Jason

February we are celebrating Jason as Volunteer of the Month at NRS! Jason’s personality and endless empathy are an amazing asset to our team in the crisis services center. 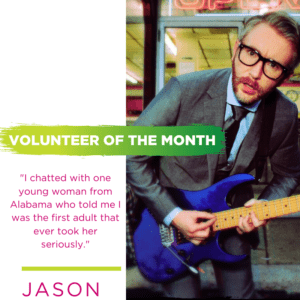 may not know already):

I co-wrote and directed a musical that ran for 96 performances in Chicago, and was covered by MTV News. Granted, it was “Jersey Shore: The Musical”, but still…

How did you first become involved with NRS?

I was reading a New Yorker piece about a psychologist who conducted a decade-long experiment in which he sent former patients a letter once a month, wishing them well and inquiring whether they needed anything. He found that the great majority did not respond. However, those who received the letters had a far lower rate of suicide than those who did not. The anecdote hit me hard–it reminded me how many people simply need some reassurance that someone out there cares about their well-being. After some prodding from my wife, I began looking for an opportunity to be that voice.

What have you learned from your experiences here?

How much more powerful non-directive feedback is than advice. People are wired to seek advice, but the conclusions they come to on their own are for more likely to stick and spring them into action.

Give us a story from your experience that stuck with you:

This is a conflation of experiences, but I’ve chatted with so many smart, capable young men and women who are trapped in repressive or abusive environments, who were incredibly grateful to hear that they were not strange for wanting to experience other things in life, or to think that they deserved to feel safe and loved. I chatted with one young woman from Alabama who told me I was the first adult that ever took her seriously, and that she would include me in her prayers, even if she didn’t know my name. I’m tearing up just typing that.

Open Mic Moment (this is your chance to say to all volunteers whatever you would like):

It’s an unfortunate thing that we live in an age where kindness and compassion is a political act, but here we are. The work we do is critical in ways we probably will never fully understand; it is weaponized hope, aimed squarely at the creeping sins of apathy and craven self-interest. Keep up the very needed good work.